While the LNP and the media are using the word ‘catastrophic failure’ for Labor – the reality is, when you look at the numbers, in terms of catastrophic failures, it’s really the polls that have crashed and burned as they projected a Labor win. They projected it so believable that at least one major betting agency paid out on it prior to the actual election.

In reality, based on current AEC projections, there has been NO CHANGE at all to the number of seats held by either side from the last election. If the AEC’s projections hold – and they may change:

Updates to the Pollieometer based on my model – and ABC numbers – are provided below.

The Pollie-ometer is being updated as results become available.  It differs from other trackers in that it assumes ‘safe seats’ are already decided and focuses on the seats that will actually decide the outcome. For more information on the terms used in the tracker- and how it works read the information below the tracker. 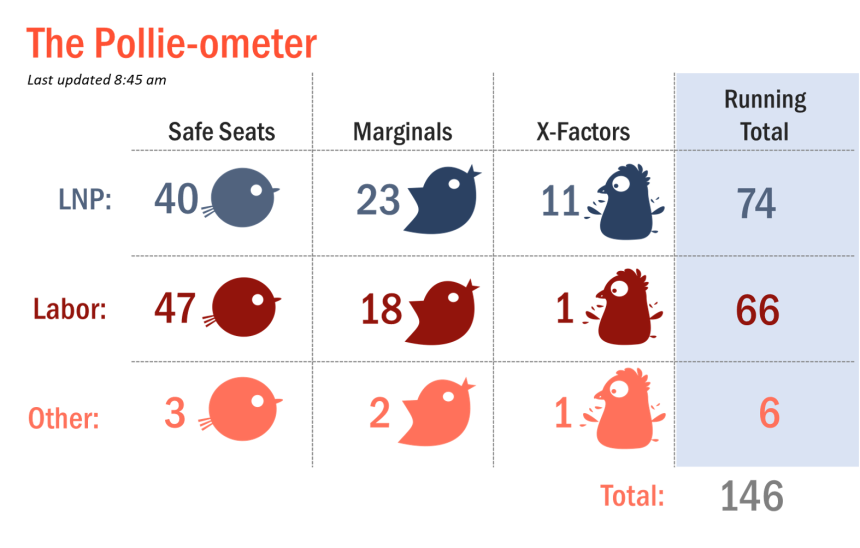 Note: Numbers in Marginals and X-Factors are based on ABC projections.

All votes are equal – but some are more equal than others

As I wrote in 2016, when it comes to deciding who rules the roost in Australia – while all votes are equal, some are more equal than others. This is because the majority of electorates in Australia are considered to be ‘safe’ seats – meaning they won’t be changing hands, because, well, they almost never do.  In 2019, 60% of electorates (90 seats) are safe seats. If you – like me – live in a safe seat, your vote in the House of Reps arguably doesn’t decide who rules the roost in Australia.

Who actually does decide who rules Australia’s roost?

This leaves 40% of electorates (61 seats) – the Deciders – who will decide who rules the roost in Australia for the next 3 years. This is made up of:

How does this impact our pollies in the 2019 Federal Election?

The following diagram splits our pollies into three groups – Safe Pollies (who hold safe seats), Marginal Pollies (who – you guessed it – live in marginal seats) and Endangered Pollies (who live in the X-Factor seats).

The Pollie-ometer: Tracking what’s really happening in the 2019 Federal Election

Since safe seats are pretty much a given – only one changed hands in 2016 – in order to keep track on how each party is really progressing as the election results unfold this evening, you need to know two things:

Typical electoral coverage mixes these up – and it can be difficult to tell what’s really happening.

The Pollie-ometer starts by assuming that all safe seats will stay where they are – and already count towards the 76 seats needed to win.  Then it adds the marginal and x-factor seats as they become known.  (Additionally, if safe seats do change hands during the night they are moved.)

So stick with me tonight as I update the Pollie-ometer to track what’s really happening.

The first Pollie-ometer will be posted shortly after polls close and results are known.