“There were three gradations of inveracity – there were lies, there were damned lies, and there were statistics” (Arthur Balfour, 1892)

Of course we know that Abbott often contradicts himself – sometimes within the space of as little as half an hour – regularly choosing truthiness over truth. But exactly what is the ratio of truth to truthiness? How much can we rely on what Abbott tells us?

I decided to take a quick look at Abbott’s most recent interview – which was just a short one in Hobart yesterday – to examine the ratio of truth to truthiness. In that interview, Abbott made one quick statement and took only two questions. All up it was no more than half a page of text when typed. But he managed to include quite a few numerical or ‘statistical’ claims.

I’ve taken a look at each of these statistical claims to see what the ratio of truth to truthiness was. Or put another way, exactly how many lies, damned lies and statistics did he managed to squeeze in…

Abbott isn’t the only one who has been throwing this piece of truthiness around. Minister for saying “We’ve-stopped-the-Boats” Peter Dutton put out a press release on Friday with the same information. And Andrew Robb repeated it again this morning on the ABC’s Insiders programme.

As I explained yesterday however, the claim they are making is true if you only look at one small subset (3.1%) of resettled refugees – those resettled by the UN. If you look at all resettled and recognised refugees – the full 100%, which includes refugees who have applied directly to a specific country rather than through the UN – then we are actually 27th on a per capita basis globally. According to the Refugee Council of Australia – this is a far more accurate measure. And if you look at how many refugees we take overall – and not just those who are resettled – well, we don’t even rank – not anywhere meaningful anyway.

According to Abbott, thanks to the Liberal Government’s strategy – and particularly their small business policies, business confidence is high.

But according to the NAB monthly survey of business confidence (shown below) as tracked on the global TradingEconomics site – business confidence has been trending steadily downwards since the Abbott government took office. Now, to be fair – it is not at an all-time low – but it certainly cannot be considered high.

And if you look solely at small business sentiment – which Abbott was particularly focusing on, it’s been in the red for a while now: 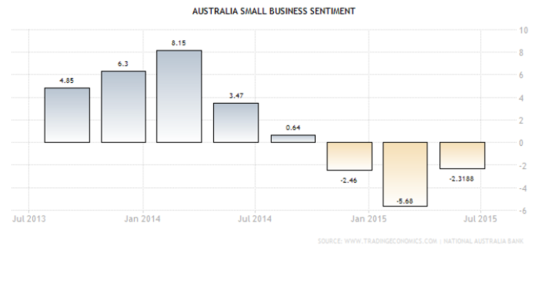 Treasurer Joe Hockey made a similar claim a few week’s back in question time, saying that the coalition had created 334,000 new jobs since taking office. It was not true then and it is no truer now.

AIM Network journalist Kaye Lee looked into these numbers back in August, and established that according to the ABS:

That’s an increase of 164,900 jobs. Not 335,000. It’s possible that the larger number only takes into account new jobs that are created, and fails to factor in jobs that are lost or where people change jobs. But either way, it’s misleading, and does not present an accurate picture of how the employment situation has changed under the Abbott government.

(Note: See info at the end of the article for an update to the above numbers released by the ABS this week.)

In fact, the record for new car sales was set in the twelve months to June 2013 – just before Abbott and Co took the reins of government – when 1,141,500 new car sales were sold. Even looking at individual months – instead of whole years – the biggest month was in September 2012, when 97,965 new cars were sold, followed by June 2013, when there were 96,766 new car sales. Both of these months were prior to Abbott and co taking office.

In absolute terms, Abbott is actually right about this. In the year to 30 June 2015, according to the ABS, there were a record 219,921 new dwellings approved.

During his brief interaction with the press yesterday, Abbott made two other ‘factual’ claims….

In fact one of the first things the Abbott government did after coming into office, was to drop the total number of refugees Australia is taking by 30% from just over 20,000 refugees per year to just 13,750 a year (or less than 0.1% of the world’s current refugees). This number has not increased since then, although there is talk of potentially increasing it in 2017/2018. So if we have taken more refugees from Iraq and Syria, it has arguably been at the expense of refugees from South-East Asia – which has the largest share of refugees globally.

Increased number of business registrations and lower numbers of bankruptcies

The final statistical claim that Abbott made was that “we have got bankruptcies at record lows“. I’m going to stay on the fence on this one. Certainly according to ASIC data shown on TradingEconomics, the number of bankruptcies has continued to grow – as is seen below. But since the number of companies has continued to grow as well – and the rates of growth are fairly similar, I’m going to fence-sit.

Conclusion: Abbott is a Master of lies, damned lies & statistics

There was not a single statistic that Abbott used yesterday which isn’t ‘on the snout’ in one way or another. Not one of his claims stands up to scrutiny without having a bit of credibility knocked out of it. Many of them ‘stretch’ the truth, by making the truth appear to be something that it isn’t. But not one of them stands alone as an accurate and clearly verifiable reflection of the truth.

I suspect there’s a good chance that you’re not surprised by this. And here’s the problem with that….

Our democracy can’t function without truth

When I started looking at each of Abbott’s ‘statistical’ claims, I wasn’t expecting to find that pretty much every single one of them was at best misrepresenting the truth with statistics and at worst, an outright lie. I know we are all conditioned now to be skeptical of politicians’ claims. But when it’s not possible to clearly verify one single piece of factual information that comes out of our Prime Minister’s mouth in one very short door-stop interview – you have to think that things have gone too far. You have to wonder whether our tolerance for politicians’ stretching the truth is just too high now – that we have become so desensitised to politicians lying, that we just don’t blink anymore.

This is a truly dangerous place to be however. According to Thomas Jefferson:

An educated citizenry is a vital requisite for our survival as a free people. (Paraphrased)

Without accurate information, we can’t make educated and informed judgments about those who govern us and those who would govern us. It’s as simple as that.

The media needs to do a better job

Politicians’ lies should be picked up by the media. But unfortunately, large portions of our media are just taking our politicians’ claims as factual without checking their sources.

There was a great example of this on twitter last Thursday, when Miranda Devine – of Daily Terrorgraph fame – tweeted back at people who were trying to explain to her that Australia does not take the highest number of refugees per capita. In her tweet – shown on the right – Devine actually provides a link to the Refugee Council of Australia’s page which explicitly states that Australia is 27th in the world in regards to its refugee per capita intake. Clearly Devine didn’t even bother to read her own link.

Truthiness is out there – so be alert

So as I’ve said before – and will undoubtedly say again – be alert and alarmed people, our democracy is under threat, not from terrorists, but from the lack of transparent, accountable and truthful government. In the words of George Orwell:

“In a time of universal deceit – telling the truth is a revolutionary act.”

Since originally publishing this article, the ABS have released job numbers for August which also include ‘rebenchmarked data’ back to 2011, which drops the number of employed people in September 2013 by a significant number. They had apparently made an error in the previous numbers following on from a delay in processing passenger cards by the Department of Immigration. If this is correct – and I say ‘if’ because it’s a massive error if it is one – then this reduces the number of employed people in September 2013 to 11,452,500.
Interestingly, the ABS’s link to their released data for the same date, still shows the higher number. If you do accept the lower number, there are now 312,900 more people employed using the August numbers – than there were in September 2013. This is still lower than Abbott’s claimed 350,000, and at the time Abbott made his  claim, the number was actually under 300,000 – but it is closer to the mark than the previous ABS numbers suggested. But since these conveniently ‘adjusted’ ABS numbers still warrant further investigation, stay tuned…….