You can’t fight an ideological war by shutting physical borders

As news came out yesterday evening that a Syrian refugee passport was found next to one of the terrorists in the Paris attacks on Friday, predictably the media pounced, and all the right wing refugee-demonisers came out in force. Our very own stop-the-boats-fetishest, Tony Abbott,  spoke with his media team – the Daily Terrorgraph, sorry Daily Telegraph – who today published an article with the following headline:

And Abbott wasn’t the only one. US Republican presidential candidate Ted Cruz came out on his personal blog yesterday saying:

“We need to immediately declare a halt to any plans to bring refugees that may have been infiltrated by ISIS to the United States.” Ted Cruz – November 14, 2015

Clearly none of these actual facts matter to the likes of Abbott and Cruz. According to their logic, this attack could have been prevented if only Europe had stopped the boats, had forced tens of thousands of refugees to stay and face almost certain death at home or risk starvation in the already overcrowded refugee camps along the borders of their home countries.

Prior to the advent of new communications technologies last century, governments could – at least in theory – stop information flows across borders since information had to be physically carried across by a person (whether as a book, document or a an idea in someone’s head).  But in this century, people don’t have to connect in a physical space – they can connect in cyber space. Ideologies can cross any border they like with no passport, no visa, no stops. 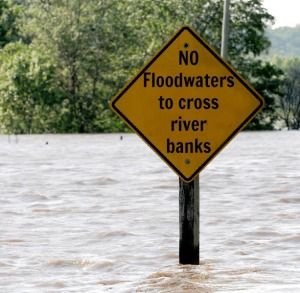 Suggesting that having stronger physical borders will have any impact on the battle against these horrific terror attacks, is the equivalent of suggesting that you could stop flood waters from overflowing by putting up a sign instructing them not to.

The reality is that we are living in a different time – a time where there are no borders around ideologies. Strategies that focus on defeating terrorists groups with traditional warfare strategies alone are doomed to fail as they don’t take into account that at its core, the war against these groups is not a physical battle, it’s an ideological one. And ideological battles are not won and lost on battlefields or at borders, they are won and lost in people’s hearts and minds.