The LNP’s latest strategy: Make it somebody else’s problem

Australian Prime Minister Malcolm Turnbull and Treasurer Scott Morrison were out in force today, continuing to ridicule Labor’s plan for a Royal Commission into the Banking and Financial Services Sector and announcing further details of their own plan – to restore the funding previously cut from ASIC by the LNP through a ‘user-pays’ model. More significantly, Turnbull and Morrison are proposing that the banks and other financial services providers take on full responsibility for funding ASIC  within the next few years, at an estimated cost of around $330 million a year.

This effectively puts what philosopher Douglas Adams referred to as an ‘S.E.P. field‘ (or Somebody Else’s Problem field) around the issue – transferring the problem of funding the policing of the Banking and Financial services sector from the Government to the sector itself.

Further, according to Scott Morrison, the LNP’s model is not only the answer to protecting Australian consumers, but we – the Australian public – will not pay a cent for it:

“Industry funding ensures that the costs of regulation are borne by those entities that have created the need for it, rather than the Australian public.”
(Scott Morrison, Press Release, 21 April 2016)

“Bill Shorten wants to spend your money to fund his political exercise…What we’re saying is that we’ll be having the banks pay.”
(Scott Morrison, Press Conference on 21 April 2016)

This claim – that we, the Australian tax payer – will not pay for the proposed LNP approach to this issue is at best dubious, and at worst an outright lie. Here’s a few reasons why….

A number of banks have come out today to say that they aren’t going to pass on the costs of funding ASIC to customers. However they haven’t been entirely clear what they mean by this.

Certainly the fact that banks won’t immediately apply a specific charge to customers or increase interest rates in response to the ASIC fee doesn’t mean that the cost of funding ASIC will not be passed on.  Presumably it will be considered a cost of doing business and just like all costs of doing business, be factored into the way they price their products and services in the future. Banks don’t typically levy a specific charge for any of their running costs – like rent, salaries, stationary, Christmas parties – but it doesn’t mean that customers (aka the Australian public) – don’t pay for them as part of  their fees and charges.

If ASIC fees are treated as running costs, then they will presumably be tax deductible for banks. If this is the case – then the total amount of tax payable by them to government coffers will be reduced as a result of them directly funding ASIC.

In fact, if all banks paid tax at the top company tax rate of 30% – which they don’t, but for the purposes of this exercise I will assume that they do – that’s around $100 Million less in tax revenue into the government coffers every year. And since you could argue that Government revenue belongs to the Australian public – that’s $100 million less we would receive every year.

This would mean that we – the Australian public – would effectively contribute $100 million towards the $330 million the banks will be paying to fund ASIC. 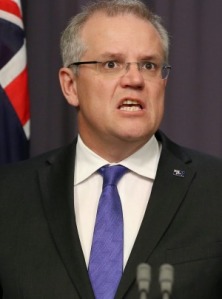 Pay up or…… ScoMo will get REALLY cross

This is the real clincher. The government isn’t actually putting anything in place to force the banks not to pass on the costs of funding ASIC to the Australian public – although doing so would undoubtedly be a difficult challenge.

So if the banks do decide to pass the costs of funding ASIC onto us, whether directly or indirectly – and as I’ve written above, that seems highly likely – there isn’t a lot Scott Morrison can do about it.

In fact, when questioned about this, Morrison said that if this did happen, he would get very cross. Furious even.

That’s it. No fines. No court cases. Just a wag of ScoMo’s finger.

Gee. I bet the banks are shaking in their boots…..as they laugh their way to – well – the bank.

The LNP Solution: Make it somebody else’s problem

The reality is, any increased policing or review of the Banking and Financial Services Sector will need to be funded from somewhere – whether it’s a Royal Commission or increased funding to ASIC. The LNP solution to this issue is to make funding the solution an SEP (somebody else’s problem) – in this case the banks.

At first glance, this may seem like a good idea. However this trend by the Turnbull government to try and transfer responsibility for funding government programs to someone other than themselves – first with the State Governments and now with ASIC – will not save us, the Australian public, any money in the long run. And in the end, it could actually cost us more.

Turnbull and Morrison’s claim that the LNP’s solution will magically be free to the Australian public is just not true. All they have done is to handball responsibility for solving the problem to someone else and washed their hands of it – a strategy they seem to be trying to deploy all too often lately.