I’m calling it folks. I’m packing up my election ‘night’ desk for another three years. While there are still a number of seats that have to be finalised, it would take such a dramatic shift in voting trends moving forward that the outcome is pretty much certain.

The LNP will be able to form government – and most probably a majority government, albeit with a much reduced hold on power. In my view, the most likely outcome is:

Even if there was some miraculous shift in trend for the outstanding seats, the absolute best the ALP could do would be 71 seats. To form government that would require them to get the support of all five Minors and Independents – and with Bob Katter having already declared his hand, this is not going to happen.

So that’s it for the House of Reps folks. Now it’s time to focus on the Senate and who holds the all important balance of power there. And while we don’t know the final outcome there, we do know the LNP haven’t won there.

I know I said I was packing up my ‘election night’ tracking desk yesterday morning – but curiosity got the better of me – so I did some quick analysis on the remaining ‘hot seats’ to see how they were tracking. Here’s my update for those still following….

I’m calling both Melbourne Ports and Hindmarsh for the ALP.  (I’m late to the party on Melbourne Ports – others called it a few days ago, but due to one in three votes being cast as declaration votes, and the strong swing to the LNP in postal votes, I held off calling it.)

To my mind, there are now only four seats where I believe the outcome is uncertain – Capricornia, Cowan, Flynn and Herbert. Based on my projections, both Capricornia and Flynn will most likely go to the LNP – but the margin is still too slim to call. That leaves Herbert and Cowan.  According to my numbers, both are more likely to go to the LNP than to Labor – BUT the margin is so slim, it could still go either way, with Herbert being the seat Labor are most likely to steal from the LNP.

This means my latest numbers in my Balance of Power meter are:

In the end, as I said in my update yesterday, the LNP will be able to form government – and most likely a majority one, albeit with the tightest of tight margins and a hostile Senate.

Buckle in for an interesting three years folks.

If you’re interested in my earlier updates  – read on:

At 9:00 am on 7 July, in my increasingly ill-named ‘Election night’ tracker – since my most recent update, more postal results have come in which have firmed up the outcome for a number of doubtful seats, and continued the swing towards the LNP that I wrote about last night.

Based on my calculations, there are now only six seats in doubt, plus two others we need to keep an eye on – Grey and Cowper – where the AEC is taking a while to do a two-party preferred count on the Green/Independent candidates. This means that while it’s probable both will be held by the incumbent LNP MP, it’s not completely certain.

Based on my projections – and assuming that both Grey and Cowper stay with the incumbent LNP MP –  this is where we currently stand:

It’s 6:30pm and during the day the count of postal votes and the few small outstanding polling booths has continued in our undecided seats. This has had the expected effect of tipping the scales further and further in favour of the LNP.

In terms of updates to my ‘where we currently stand’ statement above and the graphic below, the only thing that has happened since this morning is that one of the three seats I classified as ‘too close to call’ this morning  – Capricornia (discussed further below) – has slid further into LNP territory, and is now arguably  likely to go to the LNP.

Just how close is close?

So far for Capricornia the numbers from the AEC website at the time of writing this are 75,067 formal (or valid) votes counted – of these:

So of course the outcome for Capricornia will depend on how the remaining votes not yet counted and/or received by the AEC pan out. At this stage, all but one small group of ordinary votes are counted – one of the polling stations that go around to hospitals, which based on the other hospital polling stations probably has less than 200 votes.  However, in regards to postal votes there are:

If we assume that the remaining postal votes received but not yet counted by the AEC fall out in a similar manner to those received so far – then the outcome would be 41,662 votes to the ALP and 41,649 votes to the LNP – a victory to the ALP, but only by 13 votes.

But if we then factor in all declaration votes that have not yet been returned to the AEC (which won’t happen), then if the current postal voting trend held across all declaration voting types,  the outcome would be 45,007 votes to the ALP and 45,635 vote to the LNP  – a victory to the LNP, but only by a margin of 627 votes.

The numbers of potential outstanding votes are also not final – there could be other votes yet to be received and factored in, further complicating the potential to determine an outcome when the margins are this tight.

So how close is close? It’s too close to call – so stay tuned for an update later today…

The following commentary was written last Saturday – but the graphic has been updated along with the commentary about safe seats at the end.

As I’ve written previously, while there were technically 150 seats up for grabs in the House of Representatives this election, the reality is that the vast majority of electorates are considered to be ‘safe’ seats – meaning they won’t be changing hands, because, well, they almost never do.  This means that the outcome of yesterday’s election will actually be determined by just over a third of electorates – the Deciders. These are typically electorates which either have a high proportion of swinging voters in them (marginal seats and a few fairly safe seats) plus electorates where there is a well-known and well-liked Independent/Minor-party candidate running.

As a result, when you’re looking at the election outcome from last night, it’s really only the outcome in the Decider seats that matters.  So I’ve created the following Balance of Power Meter to track how the election outcome is going based primarily on the results in the Decider seats – rather than all seats – as it’s a more accurate proxy of how both parties are tracking.  (I am keeping an eye on the safe seats as well and adjust the chart if any of them decide to perform out of character. So far the LNP lost one – Wyatt Roy’s seat – and may possibly lose Peter Dutton’s seat.)  I am continuing to update my Balance of Power Meter – so check back in (make sure you refresh the page) for regular updates on progress. 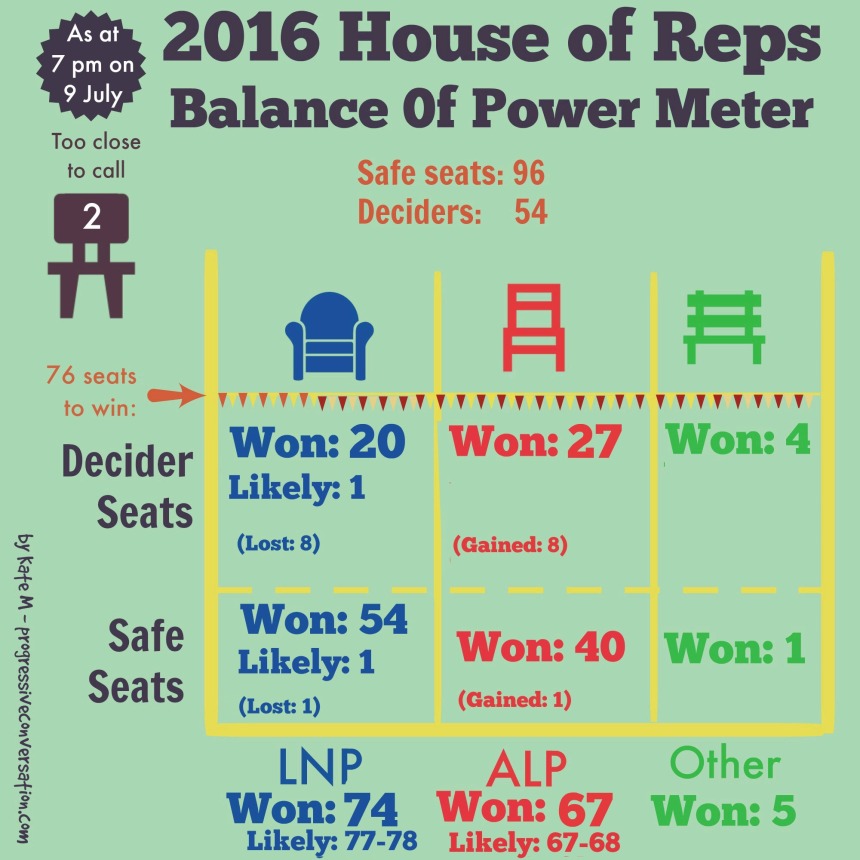 My list of  54 Decider seats shown below is based on the ABC’s Antony Green’s list of Key seats plus I have added:

I’ve included running totals for each group to show where they end up, which I will update as the night progresses.

For a full list of all 150 seats up for election see the AEC’s list.  Any seat that I haven’t listed above, is classed as a Safe Seat in my Balance of Power Meter (although the AEC may have classed some of them as ‘Fairly safe’).

Update: The LNP have lost a Safe Seat – Wyatt Roy’s seat – to the ALP and the seat of Flynn in Queensland is also in doubt, but thanks to postals is likely to stay with them. Peter Dutton’s seat was also up for grabs for a while, but he seems to have slid in by the skin of his teeth.